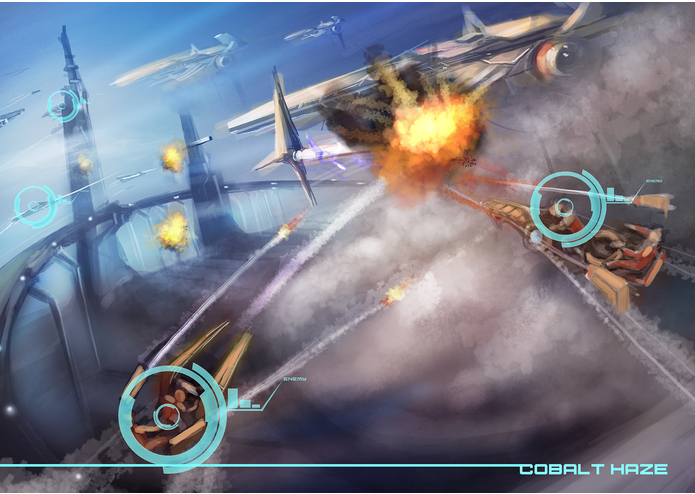 Cobalt Haze brings you the immersive experience of anti-gravity combat game, play the role as a Gunner or a Driver of an ATV (Anti-Gravity Vehicle) and rule the sky as the ultimate flying ace!

Year 2155. The earth is dying. Resources are scarce and human force was split into two empires, The Galactic Empire and The Svarna Empire. The Galactic Empire has its mission to collect the last resources of earth for interstellar journey, looking for a new earth and abandoning the current world behind. On the other hand, The Svarnas are currently struggling to defend their last earth and descendants.

This game did not use gamepad controller. Headphone is recommended to feel the whole experience of the game.

On Game Menu: Player navigate through the menus using the VR Gear’s Head-tracking capabilities. The menus will be highlighted if looked at. Then, tapping the touchpad to choose the currently selected menu.

During Combat, as Driver: Gear VR is required to navigate the direction of surrounding. Vehicle will rotate towards the driver’s sight. Swipe touchpad front/back to speed-up/speed-down the AGV.

During Combat, as Fighter: Gear VR is required to shoot enemies, if the enemy in the gunner’s lock on area (the HMD) for a certain amount of time, the AGV will automatically shoot the enemy.