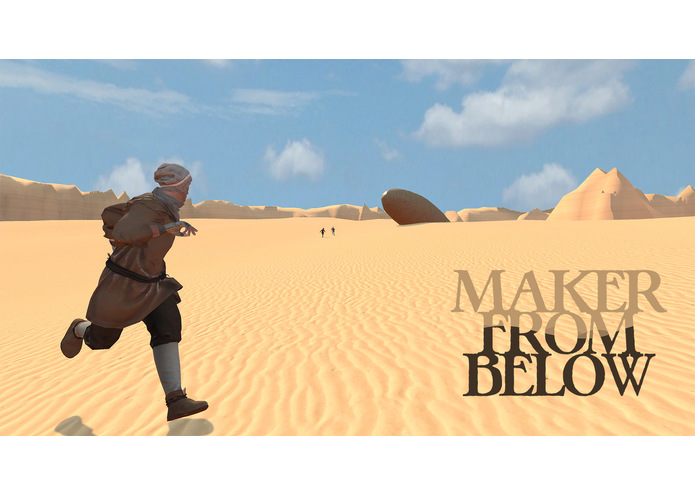 Maker From Below is a cooperative multiplayer* first-person action game set in a science fiction desert environment. You play either as a smuggler or a sandworm. Smugglers have the goal to cross the desert and make it to the desert town. Sandworms have the goal to stop the smugglers and snatch them from the surface.

The game is inspired by Frank Herbert’s Dune and the Left 4 Dead series. Maker From Below features dynamic team play and a unique VR multiplayer experience.

Sandworms live under the surface, deprived of nutrients. In order to survive they must feed of that what travels on the surface. Despite having selfish business interests, smugglers travel in groups in order to save each other in case of a worm attack.

As a smuggler, you will have to devise strategies while being under the constant fear of being eaten alive.
As a sandworm you will have to plan your attack* carefully, there are surface temperatures to take into account, and while attacking one smuggler may seem harmless, there is the risk of being attacked by a group of smugglers on a rescue attempt, when exposing yourself on the surface.
*attack function not implemented in JAM build

The desert sky is populated by wormbirds. Like vultures these birds feed of off the remains of the sandworm’s prey. The birds have a special ability to see and track worms below the surface. This enables the smugglers to track the worm’s location. Spot a high concentration of wormbirds in one location? Then there are most likely sandworms very near, lurking right below the surface.

*Due to networking issues, the current (jam) build of the game unfortunately doesn’t offer any multiplayer functionality. AI controlled characters aim to illustrate the multi-user experience.